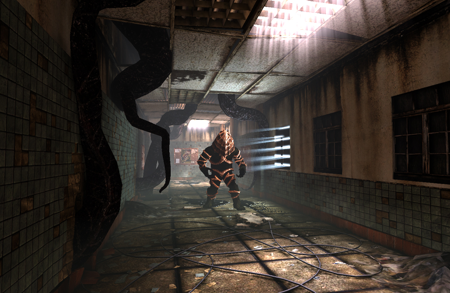 Gaming on iOS devices is taking off these days, with titles such as Angry Birds and Infinity Blade proving as big sellers for their respective development houses.

In fact, those two games are named as the inspiration behind a new title that’s due to be released next month, going by the ominous name of The Dark Meadow.

Promising to be a ‘modern fairytale’ type affair, The Dark Meadow has only been in production for three months, which shows the quick turnaround that the game’s Unreal Engine affords…

In an interview with PocketGamer, the guys behind the game shared some more information about its development and inspiration, with an unusual pairing of Infinity Blade and Angry Birds heavily involved. The film Pan’s Labyrinth also served as inspiration for the team.

“Pan’s Labyrinth is similar in that it wasn’t a direct horror experience, but more of a fantastical fairy tale. On the game front, Infinity Blade was a big influence since it worked out a lot of the kinks with the platform.

When you use the crossbow, you touch the screen, gesture to pull the arrow back, and let go where you aim – kind of like Angry Birds in 3D. It feels good!

Your other weapon is a sword. We even looked at Fruit Ninja for inspiration since it was so elegant. In fact, you can say we borrow fromAngry Birds and Fruit Ninja, along with, of course, Infinity Blade for the ducking, parrying, and other moves.”

With The Dark Meadow slated to be landing on our devices in August, we hopefully won’t have too long to wait to see if the aim of a darker, more sinister gaming experience becomes a reality.

Read the full interview for more insights into the game at PocketGamer.co.uk.