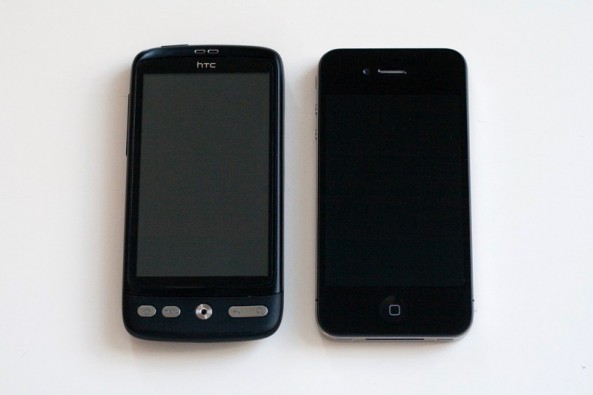 Apple is looking to block sales of HTC smartphones in the US. Like the ongoing copycat lawsuit with Samsung, Apple claims that HTC infringes on several of its iPhone patents.

HTC has seen impressive growth in the last year, and the company is responsible for many of the most popular Android devices on the market right now. Apple feels that HTC owes a little respect (and by “respect” we mean money) for the allegedly infringed patents…

“Apple claims HTC is infringing five patents related to software architecture and user interfaces in portable electronic devices, hardware for touch screens and movement sensors, according to a complaint filed July 8 with the U.S. International Trade Commission in Washington. The complaint is the second Apple has filed against Taoyuan, Taiwan-based HTC.”

This actually isn’t the first time that Apple has gone after the folks at HTC, but this second time around Apple is pulling out all the stops. Apple shows no signs of backing down from its request to have the International Trade Commission block sales of HTC devices until an agreement between the two companies can be reached in court.

“HTC is dismayed that Apple has resorted to competition in the courts rather than the marketplace,” said Grace Lei, HTC’s general counsel. “HTC continues to vehemently deny all of Apple’s past and present claims against it and will continue to protect and defend its own intellectual property as it has already done this year.”

Is Apple scared of HTC’s close affiliation with Android? Google’s OS seems to be the only force that stands in Apple’s way these days. With Apple looking to win the case with Samsung over similar patent infringement, Apple is slowly but surely dealing swift blows to its competition in court.

HTC isn’t a small kid on the playground by any stretch of the imagination, so it will be interesting to see which company comes out on top in this patent infringement case. We highly doubt that the court will grant Apple’s request and have the FTC block sales of HTC devices.

Amidst all of this legal red tape with other smartphone makers, Apple is still right on track to release its new iPhone(s) this Fall. Cupertino plays by its own rules. Does that bother you?