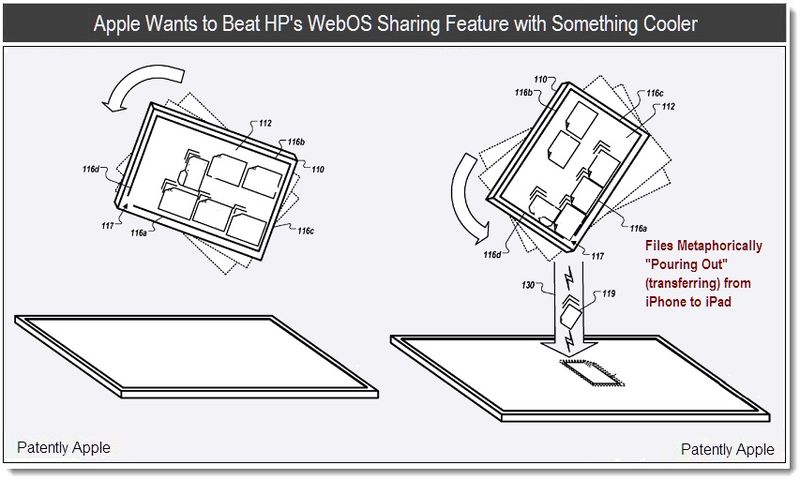 Apple is known for registering patents for everything they think of, just in case it becomes useful, or indeed feasible, at a later date.

A new patent to come out of Cupertuno suggests the company is working on a new way of sharing files between devices, similar to the way HP’s new TouchPad and accompanying smartphones do.

The HP way involves touching the two devices together in order to initiate the connection and subsequent transfer of files and data. If that sounds familiar, it’s because the whole process is very similar to contact sharing app, Bump.

What Apple’s patent suggests, is a more metaphorical way of establishing the connection…

Imagine, if you will, “pouring” files from your iPhone, to your iPad or similar device. The action of tilting the device that is instigating the transfer is what tells a nearby device to receive a connection.

As Patently Apple suggests, such physical metaphors could prove a boon for the less tech-enabled amongst us.

Other potential uses include sending video or files to other devices using a simple ‘flick gesture’ to initiate the process.

“In some implementations, in response to an intuitive, gesture made on a touch sensitive surface of a first device or by physically moving the device, an object could be transferred or broadcast to other devices or a network resource based on a direction, velocity or speed of the gesture.”

Coupled with existing AirDrop and AirPlay technologies, these new methods for sharing could prove an intuitive way for the less tech-savvy to join in the magical, and indeed revolutionary, world Apple is creating for us.

Of course, this could be just another patent that never sees anything useful put into production.