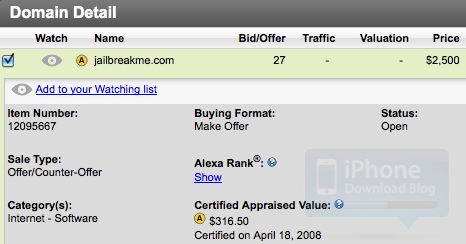 If you go to GoDaddy.com right now and do a search for the JailbreakMe.com domain name, you will get a message telling you that this domain is up for sale in an auction opened to anyone to bid on.

It shows that the site has been appraised at $316 but the current auction price is $2,500. The auction, scheduled to end on July 16, will probably go much higher than that considering the value of this domain name.

But why is JailbreakMe.com for sale, and who is selling it?

Doing a quick WhoIs search for the domain name doesn’t give us much information as it is currently privately registered. But isn’t Comex the owner of this domain? I personally don’t think so. JailbreakMe.com has been online for a few years now and I think the original owner of the domain still is the current owner, who’s kindly letting Comex use the domain.

I do not have any evidence to prove that but I do remember Comex mentioning something about this situation when he first released his own JailbreakMe jailbreak almost a year ago.

Now why would JailbreakMe.com be up for sale? I have absolutely no idea.

What I know for sure is what’s going to happen to JailbreakMe.com. The site is going to sell for a hefty price. Some content scraper scumbag will buy it and turn it into a spammy site, just like ultrasn0w.ca or geohot.ca. Heck, look what happened to ziPhone.org.

It’s too bad, but at the end of the day, it’s just a domain name.

Update: Yup, I was right. Comex just confirmed that he doesn’t own JailbreakMe.com. iH8Sn0w speculates that Nicholas Penree, the original creator of JailbreakMe still owns the site, as I explained above.