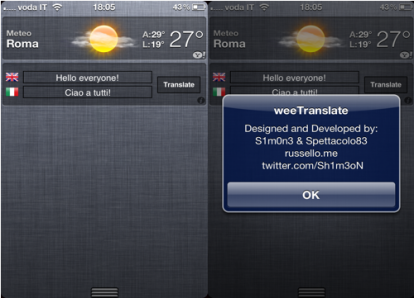 For those of us that interact with multiple languages on a daily basis, this widget could prove invaluable.

More language support would be nice, but weeTranslate is still a great, first version widget for iOS 5 Beta 1. A big thanks to Simone and the other jailbreak devs that have been cranking these widgets out so early in the iOS 5 testing process.

To install weeTranslate on your jailbroken device running the iOS 5 developer beta, you need this repo in Cydia: http://russello.me/repo/

What do you think of weeTranslate? Useful for you?