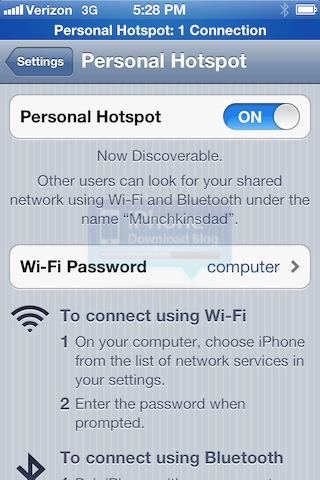 Here is a new iOS 5 feature that hasn’t been documented yet, most likely because it’s probably a bug that will be taken care of in the next beta release. If you own a Verizon iPhone (aka CDMA version of the iPhone) and you go to Settings > General > Network > Internet Tethering, and turn the toggle ON, you will be able to tether your device for free, turning it into a Wi-Fi hotspot at no charge.

I don’t have a Verizon iPhone so I couldn’t verify this myself but I asked several people on Twitter and they were all able to turn tethering ON, without having to pay anything to Verizon…

iDB reader, Joel, who was the first to tip us on that, explains:

“In iOS 5, as you know, tethering is now an option. On the Verizon wireless build of iOS 5 when you enable tethering you are not charged nor do you have to have a tethering plan. It just works I am using it tethered via bluetooth to my MacBook right now.”

Verizon normally charges $20/month for 2GB of data for its iPhone tethering plans. It appears that a bug in iOS 5 Beta 1 is going around this and allows native tethering for free.

Enjoy while it lasts!

[Thanks everyone for the help]