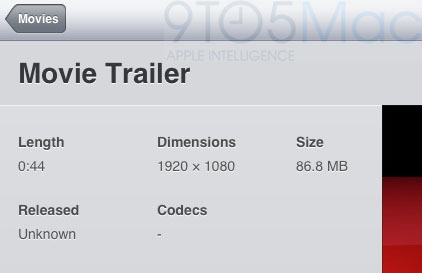 An interesting tidbit has been uncovered in the iOS 5 beta relating to HD video playback. It appears that iDevices will finally be able to playback HD video at a full, 1080p resolution.

Specifically, the iPad 2 has been confirmed to have the ability to playback full, 1080p video in the Videos app. In the past, iTunes wouldn’t even allow the syncing of 1080p video to an iDevice.

“According to first hand accounts, playback is very smooth and looks great. End users will be able to get their hands on this new feature in fall, when Apple officially delivers iOS 5 to customers.”

Apple is really bringing out the stops in iOS 5. New features are still being discovered, so stay tuned to iDB!