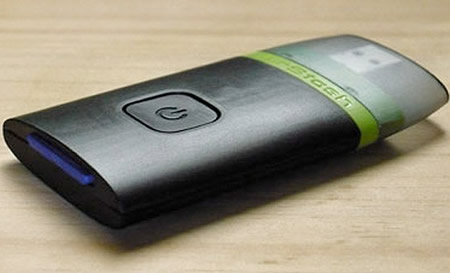 A major downfall [to some users] in iOS devices is the lack of expandable memory. In fact, that’s generally one of the first things an Android-toting user would mention in a debate between the 2 popular breeds.

The iPhone comes in a 32GB, but that may not be enough space to lug around all of your files and media content. While even feature phones sport card readers nowadays, Apple has yet to include them in their lineup. So what if you want information on your SD card on your iPhone?

Though there are several ways to do this, portable media drives have been rather popular lately. Enter the AirStash, the device-iOS app combo that allows you to view content from a standard SD card on your iDevice without any wires.

Sebastien posted a video of the accessory last fall when it was first announced, but since portable storage and cloud systems have been a popular topic lately, we felt it was relevant to shine some more light on the product.

AirStash is an SD card reader with a twist. The device creates its own Wi-Fi network, and connected iDevices can access the SD card using a web browser or the compatible iOS application. Up to 8 people can be connected to AirStash at once using the built-in web server.

The reader is compatible with standard SD cards up to 32GB. A lot of mobile devices now use micr0 SD cards, but a simple adapter should make them work. Battery life comes in at 5 hours of streaming video, similar to the Seagate GoFlex drive.

Although I like the idea of AirStash, it does have its drawbacks. The fact that you must connect to its broadcasting Wi-Fi network means you lose whatever connection you had. The app doesn’t support background audio though, so multitasking is really out of the question anyways.

While this solution might be perfect for someone who frequently transfers files from an SD card or micro SD card to their iPhone, I think I’ll walk casually by this one. But for folks interested in the AirStash, you can pick one up here for $99.