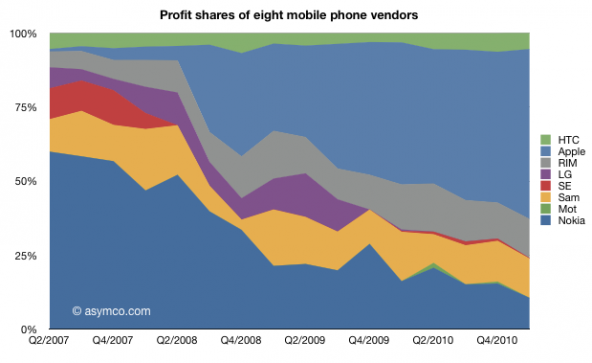 Dang! I know a lot of companies that’d be happy with half the results Apple was able to pull in the first quarter of its financial calendar. As usual, Apple raked in some ginormous revenues, and some even bigger profits.

Historically, Apple has been a profitable company for a long time. Their secret is pretty simple: market shares don’t matter; they want to sell less products, but at a higher price. And this has paid off quite well so far…

“Looking at operating profit shares, the picture is plain to see. While RIM, Samsung and HTC have maintained profit share, between 2007 and now, profit share has mostly shifted from Nokia to Apple.

But this does not tell the whole story. Here are the absolute amounts of operating profit from mobile phones. Exactly three years ago Nokia was earning 47% profit share or $2.35 billion. This past quarter Apple’s 57% was equivalent to $5.23 billion, more than twice as much.”

Can Apple sustain this model? As an Apple stockholder, I sure hope so.