Following our report that iOS 5 will have voicemail transcription, a new patent has surfaced that details even more voice integration possibilities. Namely, it appears that Apple is looking into a native text-to-speech and speech-to-text converter for the iPhone.

This patent reveals some very interesting applications that could result from such a technology in iOS. Beyond the basic voice and text transcription, this patented converter could allow for a more unified experience between speech and text communication…

“According to a new Apple patent application that was published this morning by the US Patent and Trademark Office, future iPhone’s are likely to provide end users with effective new ways of communicating in both noisy environments like a restaurant or even during a quiet office meeting without stirring a mouse. The system involves using new text-to-speech and speech-to-text converters as well as providing a means of sending prerecorded notifications to the caller if you’re unable to speak when answering your phone.”

If you’re not in the optimal environment for talking on your iPhone, you’re most likely in two different circumstances. Either your environment is too loud for effective speech communication through a phone call or voicemail, or your environment is too quiet to allow a phone call. You could be, as Patently Apple suggests, in a loud public place or in a quiet office during a business meeting. Both examples don’t really allow for easy voice communication.

What if your iPhone could help you bridge voice and text communication? Specifically, the iPhone could be used to convert text you input into a vocal message to be sent at your choosing. Like Google’s Android OS, you could also speak into the iPhone to convert your voice to text. 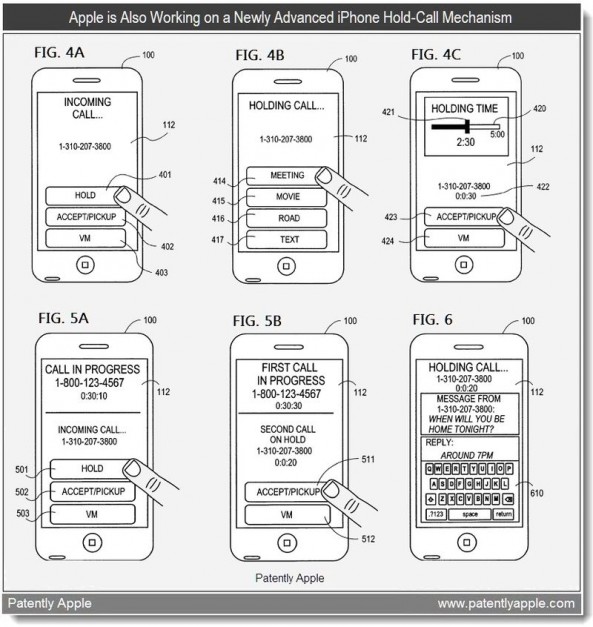 Pre-recorded messages were also addressed in a secondary patent that was recently filed by Apple. Instead of simply declining an incoming call, you could choose from a list of pre-recorded messages to be sent to the caller. (Ex: “I’m in a meeting,” “I’m in the car,” etc.)

We believe that voicemail transcription is just one of the voice-related features we’ll see in iOS 5. Word on the street is that Apple has partnered with Nuance for some serious voice integration in the next version of iOS.

What do you think about this new round of patents? What type of voice features are you looking forward to in iOS 5?