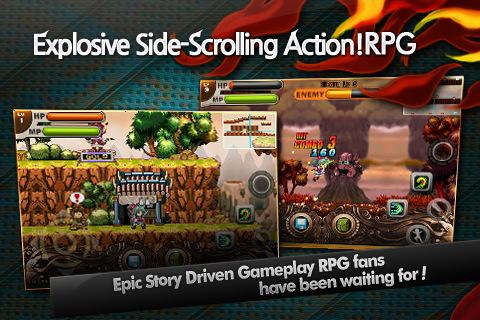 Samurai Girl [iTunes Link] was developed by CJ Internet Corp and is a 2D Action RPG Platformer for the iPhone and iPod Touch. Those of you who are familiar with the genre will not be disappointed as this game is jam-packed with cut-throat action in a retro-arcade fashion.

The story begins by introducing you to the main character Hikaru, the daughter of the Guardian of Sakura (her father), the Legendary Sword. However her father was killed by a robot controlled by a character named Delta-M who was looking to take the sword away from him. Hikaru managed to escape with the sword but lost her memory when she fell down a cliff.

Samurai Girl incorporates a few interesting features that are different from your normal RPG games. First, most RPG’s use the experience system where users will collect enough experience points to level up. Samurai Girl on the other hand uses a skill book system. You will find these skill books littered around the game which can then be used to improve your abilities.

Second, is the use of a pet system which is quite unique to this genre. From earlier on in the game you will receive a Phoenix hatchling and can raise it by feeding it meat. Once you get it to level 60 you will be able to ride it and burn your enemies with hellish fire or reach difficult hard-to-get areas. It does however take some time to get to that point and raising a Phoenix in this game is like taking care of a plant at home. So for those of you that don’t have green thumbs, don’t worry because it’s a game and your phoenix will not die.

Third is the intense action of the game. From the get-go you will be battling and slashing your way through the enemies. The animation and fluidity of the graphics are well designed and look really nice but for some reason the developers didn’t add Retina display support in this game. However this can be forgiven as everything looks very nice. One problem is that this action can become repetitive at times.

Controlling the game is what you would expect from 2D platformers. You will move back and forth with the D-Pad on the left and the action and skill buttons will be on the right. You will be able to do a double-jump and will be able to jump platform to platform with ease.

I do however have one gripe about the controls. Throughout the game you will learn special skills from the Swordmaster and you can choose only two and place them in your quick slot buttons. I thought this was kind of annoying because there were many special skills and to only be able to use two of them kind of felt like a waste.

1. Too much “grinding”
2. Expensive Inapp purchases
3. No Game Center

Overall I thought the game was amazing. I sat down and played this game for three hours straight and I wasn’t even to level five! The action and gameplay is exciting and the story isn’t too bad either. The introduction of the Phoenix and a different level/skill system made this game fresh and really separated it from other similar games.

However the lack of a Retina Display support and the ability to only use two special skills should be fixed in the next update. In addition, not including Game Center is a mystery to me. But for only $.99 I can’t complain because I got a great game for a steal of a deal. Get it while it’s hot!