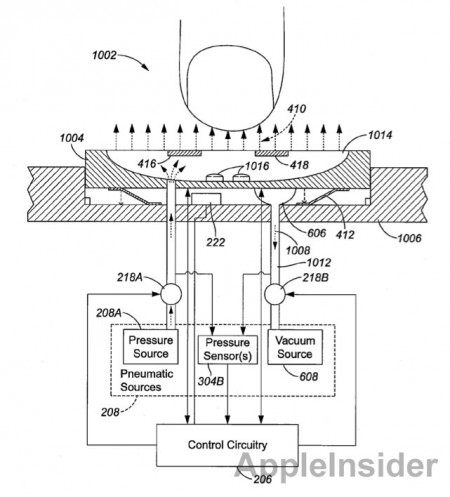 Apple really shocked the world when they unveiled the original iPhone back in 2007.  An all touch screen device with no stylus and an on-screen keyboard was certainly not the norm for the wireless industry at that time.

The iPhone’s virtual keyboard has generally been at the top of its class, but that hasn’t stopped Apple from experimenting. AppleInsider has come across an interesting patent application from the Cupertino company for a new style of compact keyboard…

The filing reveals Apple’s solution to the problem that has plagued many smaller keyboards in the mobile industry. When companies make keyboards thinner and more compact, the keys don’t have very far to travel, which seriously impacts tactile feedback.

How does Apple propose to fix this?  The documents describe multiple methods of creating tactile feedback for users on smaller keyboards. The first system combines proximity sensors and air holes in each key. When a user is about to press a key, air flows from the device to the user’s fingertips.

The other method is a little more complicated. It incorporates a pneumatic system that would “advance the selected key in a direction of actuation in response to to detecting user selection.” When a key is pressed, it pulls away from the user, providing feedback. 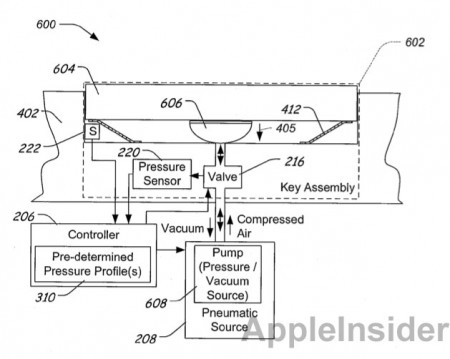 Could this be a glimpse at a future iPhone keyboard? It’s hard to tell, most patents don’t make it to consumer products. There also seems to be a lot going on here for a mobile keyboard. But Apple has always had a knack for implementing complicated technology in their products, in a simple way.

What do you think? Would you want an iDevice with a physical keyboard?