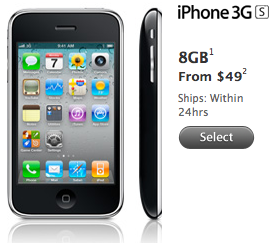 While the iPhone continues to be widely popular, each new device launch seems to come with a large amount of criticism. The original iPhone didn’t have a cut and paste feature, the 3G didn’t have video recording, and the 3GS only had a 3.2 MP camera without a flash.

Although its specs aren’t always cutting edge compared to its Android counterparts, the iPhone has been a handheld favorite since its inception. This fact is reiterated by a recent report that not only is the iPhone 4 the top selling smartphone for Verizon and AT&T, the 3GS is outselling top Android phones…

In a note to investors this morning, Canaccord Genuity analyst Michael Walkley made some interesting comments regarding Apple’s smartphone. According to the analyst’s checks with retail sales channels, Apple’s previous generation iPhone is outselling Android powerhouses like the Motorola Atrix 4G.

AT&T started selling the dated iPhone 3GS for $49 earlier this year, with a 2 year agreement. The promotion helped Apple sell nearly 20 million iPhones last quarter, as it was the cheapest that the popular smartphone had ever been offered in a retail setting.

Maybe Apple isn’t considering a cheaper iPhone at all. By selling their discontinued products at such a low price point, Apple is able to stay competitive against less expensive Android phones with entry-level features.

It’s funny how often Apple is criticized for being behind the technology curve with their iPhone line, but a phone that has been out for nearly 2 years is outselling dual core Android phones. Maybe the average person really doesn’t care about the specs.