Many car makers have been looking at integrating smartphones with their latest vehicle models. Just look at the mobile application for the Chevy Volt. The app allows you to unlock and start your car via your smartphone.

Other companies, like BMW, are trying to push the integration even further. While cars have offered iPod interfaces and hands-free systems for quite some time now, they’ve never compared to what the german car maker has been working on with their ConnectedDrive…

BMW’s iDrive system has been extremely controversial since they launched it back in 2001. Many folks claimed that the interface was too complicated to use, and that simple tasks like changing the radio station involved far too many steps.

The system has since undergone many upgrades, and more recently has butterflied into ConnectedDrive. This is where the driver, the vehicle, and their mobile devices all converge. Although it adds some neat features, I don’t know if it’s getting less complicated or more. 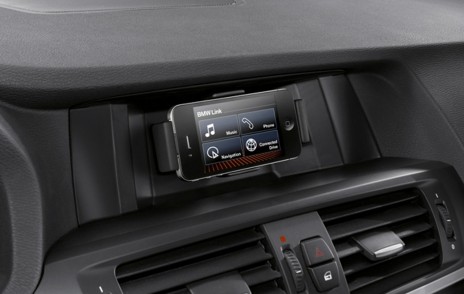 Nevertheless, the system looks awesome, and Autoblog was nice enough to give us a peek at what it looks like. Your iPhone is integrated into the ConnectedDrive system via the iPhone dock in the center console. Once a custom BMW app is launched on your device, your phone and car become one.

I’ve never seen iPod integration look this good. The system uses iPod-out, which was designed by Apple. You can scroll through your album artwork and even build genius playlists on the navigation screen.

Applications like Pandora work natively with the iDrive knob, allowing you to scroll through channels and song lists directly on your dashboard. There are even apps for tailored experiences with services like Facebook and Twitter.

Before everyone starts freaking out, Autoblog has commented on the social networking integration and mentions that it is of automotive grade:

“The primary function is less about reading status updates, and more about sending a quick, pre-programmed post on the go. The system can pull in hundreds of data points from the vehicle and navigation system, allowing you to update your status with location information, weather and host of other data.”

The system uses the existing 3G connection from your iPhone for the internet connection. It sounds like BMW is in talks with several companies to port over other popular mobile applications like Fandago and OpenTable.

While I can see the advantages of applications that make calling in dinner reservations or listening to movie times easier, I can’t say I’d ever use the built-in social networking services. You can already update your status from pretty much every other device on the planet. Why do it while you’re trying to drive?

Regardless, the technology is cool. It’ll be interesting to see how other car companies attempt to merge smartphones with future vehicles.

What do you think? Is this overkill?