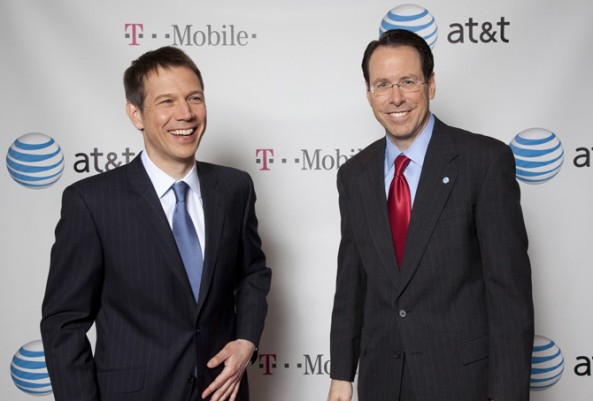 Since the news surfaced about AT&T’s potential acquisition of T-Mobile, many have concerned themselves with AT&T’s motivation behind the move.

Unsurprisingly, Sprint, the company that stands to lose the most from the deal, is officially in opposition and has asked the government to block the $39 billion dollar transaction.

AT&T’s Mobilize Everything website was recently updated to reflect the news that a filing with the FCC has been made. In it, they expressed their reasoning behind the move, and the reasons why they believe it will benefit the wireless industry as a whole…

Oddly enough, one of the first things mentioned on the website is, (excuse me while I muffle my laughter) Competition and Pricing:

So wait, buying your competitor makes for more competition? This is what you’re telling me?

But wait, the hilarity doesn’t stop there…

AT&T and T-Mobile USA customers will see service improvements – including improved voice quality – as a result of additional spectrum, increased cell tower density and broader network infrastructure. At closing, AT&T will immediately gain cell sites equivalent to what would have taken on average five years to build without the transaction, and double that in some markets.

Oh, so that $25 billion that you will deliver to T-Mobile’s parent company, in cash no less, couldn’t have been used to upgrade your infrastructure? So basically, you’re admitting to your ineptness when it comes to forecasting, and being proactive? Check.

AT&T has helped make the United States the global leader in mobile broadband and smartphone sales. AT&T’s mobile broadband leadership, however, presents it with unique spectrum and capacity challenges. A smartphone generates 24 times the mobile data traffic of a conventional wireless phone, and the explosively popular iPad and similar tablet devices can generate traffic comparable to or even greater than a smartphone. AT&T’s mobile data volumes surged by a staggering 8,000% from 2007 to 2010, and as a result, AT&T faces network capacity constraints more severe than those of any other wireless provider.

Okay, I’ll give them a pass on that one. It’s safe to say that no one expected the iPhone to take off to the degree that it did, and those are some pretty ridiculous percentage hikes. I’m sure the tablets aren’t doing AT&T’s network any favors as well.

Even still, I think it’s sad that a company that has this much cash on deck sees purchasing their rival as the only way out of their problems. That shows poor planning, and pathetic forecasting. That’s what the suits at AT&T get paid to do. That’s why they get paid the big bucks. What were they doing all of this time?

Personally, I couldn’t care less whether or not the deal goes through. I hate the fact that there would only be one GSM provider in the states, but then again, it never seemed like T-Mobile was realistically getting the iPhone here in the US in the first place.