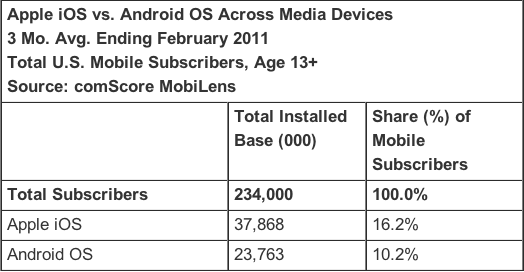 We are always comparing iOS to Android in some form or another. From device performance to market share, we’ve held many debates on which is the greater platform.

While Android smartphones dominate Apple’s in terms of market share, what about in terms of total mobile OS exposure? Out of phones, media players and tablets, which platform is the most popular?

Well known research firm comScore recently unveiled the results from their latest study.  Though they were targeting iPad user data, their research team found out some interesting information on the iOS user base.

In their 3 month study of total U.S. Mobile Subscribers ages 13 and up, they found that only 27% of iPad users were carrying an Apple smartphone. RIM users weren’t very far behind at 17.5%, and 14.2% of iPad users had Android phones. 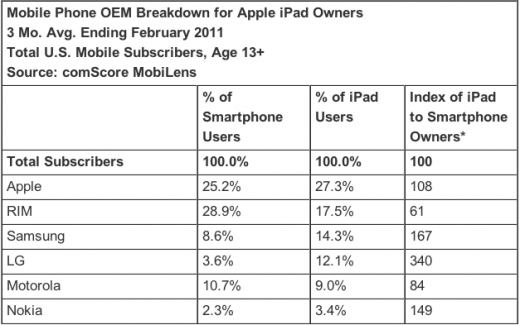 Perhaps the most interesting find was the total amount of devices sporting iOS versus Google’s Android. Counting iPhones, iPads and iPod Touches, iOS has a combined platform reach of 37.9 million. Of that 37 million, only about 4 million owned more than 1 iOS device.

Where does Google come in at? Counting all mobile phones along with devices like the Motorola Xoom, Google has an install base of 23.8 million.

I don’t think the results are too shocking. iPod touches dominate the mp3 player industry and the iPad certainly hasn’t had any stiff competition in the tablet market. Although Android is winning the smartphone battle, Apple appears to be leading the mobile platform war.