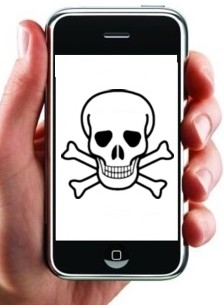 Those of us who enjoy Apple products also enjoy a sense of security. In the 4 years I’ve been carrying an iPhone, I’ve yet to have to worry about security on my phone, other than maybe a passcode. Apple’s tight grip on iOS and 3rd party developers has actually done well to keep security threats at bay.

I’m not saying those days are over, but there is an interesting story floating around the internet that surfaced sometime over the weekend. I brushed it off at first, but when a Google search returned over 100 results, I started reading. Smooth Blog, among many others, is reporting that a virus has been infecting iPhone users around the globe…

The so-called virus effects iOS devices, including iPads, iPhones, and iPod touches. Apparently, users browsing for information on ‘jailbreak‘ and ‘unlocking‘ from their iOS devices are the ones most likely to get infected. The virus itself is nestled behind a false ad that claims to unlock your iDevice for free.

Users are reporting that the advertisement leads to a web page that shows a 10-15 second animation, followed by the text: “DOWNLOAD UNLOCK 2 NOW FREE.” Afterwards, the infected users report that their iDevices were completely wiped of information, even data on their SIM cards.

Given the broken English in a lot of the postings, I wouldn’t put too much stock into the story. However, just to be on the safe side, I would recommend avoiding surfing for ways to unlock your iPhone from an iOS device for the time being. If nothing else, just avoid clicking on shady ads that offer free jailbreaking or unlocking services. We provide tons of tutorials and guides to do that for free.

Does anyone know of someone that’s been effected by this claimed virus?