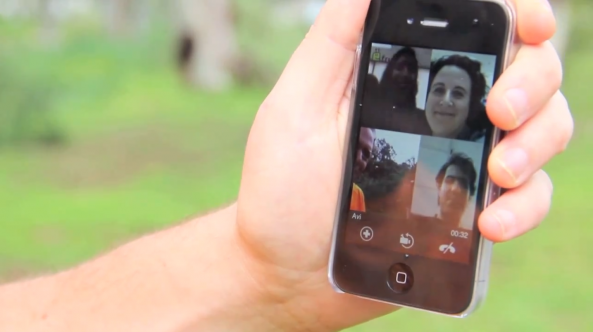 The popular video chat app called fring has announced that it will bring the world’s first group video chat functionality to iOS and Android. The fring app offered video chat on the iPhone long before Facetime, and it’s exciting to see such an innovative team bringing group video chat to the mobile space.

The group chat feature will allow you to have simultaneous video chat with up to four friends at once. Check out the demo video below…

“The dev team is putting the finishing touches on a super cool new service: free, mobile Group Video Calls.
We are having too much fun with it already, and want to get some feedback from users ahead of public launch on Android & iPhone.

Of course, this is super-exciting as it’s the 1st time the world will get to enjoy free Group Video calls. This fring-feature lets 4 friends video call each other simultaneously, making it a mobile video calling party of sorts.”

This new feature from fring is currently in limited beta. You can sign up to be apart of helping with the final testing stages before the feature goes live in the App Store.

While I don’t personally use video chat often, I’m sure many people will find the ability to do group video chat on the iPhone very appealing.

Fring is available for free in the App Store. And the group video chat feature will not cost anything extra. Pretty cool stuff.

What do you think about group video chat coming to the iPhone in the form of a free app? Will Apple follow suit and update Facetime with group chat functionality?