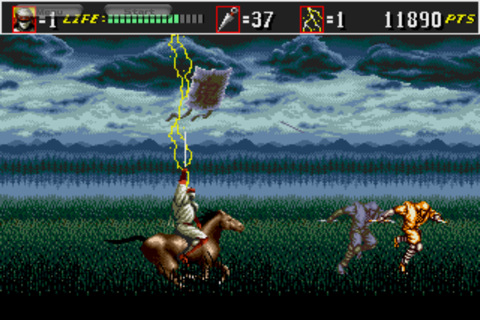 Shinobi III: Return of the Ninja Master [iTunes Link] was released by SEGA in the 1990’s and makes its return to the iPhone. Like the original, you will control the ninja Joe Musashi, whose sole mission is to take down the evil Neo Zeed syndicate.

Gameplay is pretty straightforward. Your main weapon is the shuriken, so most of the time it was shoot your enemy before they shoot you. You will also have a slash attack, dive attack, screen-clearing blasts and more but I regularly found myself using just the shuriken… 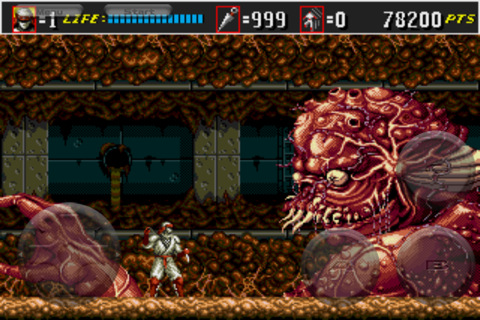 You will travel through a 2D side-scrolling world using the virtual D-pad. Controlling the movement will be on the left and there will be three action buttons on the right that throw deadly shurikens, power up and jump.

The problem with this control setup is that my thumb covered much of the left-hand side of the screen! The same applied to the action buttons as well; basically you had to keep your fingers away from the screen to see what was happening on the screen. This did not make the game unplayable, but it was horribly awkward and did block the view.

For those looking for a remake of the old Shinobi III game then you’re in for a disappointment. The game is a direct port, in other words the graphics is an exact mirror of the old classic version.

The animation is what you would expect from the SEGA era yet look crisp through the iPhone’s Retina display. The classic music and effects are back as well. Listening to it will take you back 20 or so years when some of you old-school gamers spent every waking moment playing these type of games.

If you are into retro games then you should love Shinobi III. The old-school graphics and music are back to jog our memories of a time long past. However, the control setup is obtrusive and frustrating.

Unlike other iPhone games of this genre, there are many different types of enemies so gameplay never becomes repetitive. For those who love these type of games then it’s definitely worth the $2.99 (4.5 stars with 27 ratings) in the app store today.

1: Great for fans of the game franchise

2: Looks great on the iPhone

2: Just a port and not a remake