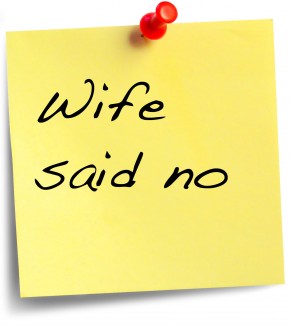 I know a lot of people who waited in long lines for iPad 2s. I waited quite a while myself and didn’t even manage to snag one due to lack of inventory .

But what about the people who got their hands on iPad 2s and then returned them to the Apple store? What reason could someone have for returning such a beautiful device?

Apparently Apple execs have been extremely curious about that as well. iPhoneAlley is reporting that they have a retail connection who claims that Apple has been asking reps to note why customers are returning iPads so they can troubleshoot any concerning issues.

One story in particular made it pretty far up the chain in Apple command. After going through returned iPad 2s with notes that read “Not that much different than the first iPad” and “Microphone was too fuzzy”, one came up with a sticky note that said “Wife said no.”

This apparently tickled the employees so much that they escalated the issue up the corporate ladder. The gentleman who returned the iPad 2 after waiting so long in freezing, rainy conditions was about to get a nice surprise.

iPhone Alley reports that the guy whose wife forced him to return the device, got a package a few weeks later in the mail from Cupertino. It was a new iPad 2 with a sticky note that read “Apple said yes.”

This is no doubt good publicity for Apple as their iPad 2 continues to be a hit worldwide. The site maintains that the story 100% real, but I just can’t see Apple sending out a free iPad 2.

What do you think? Did Apple send out a free iPad 2? Tell use your thoughts below!