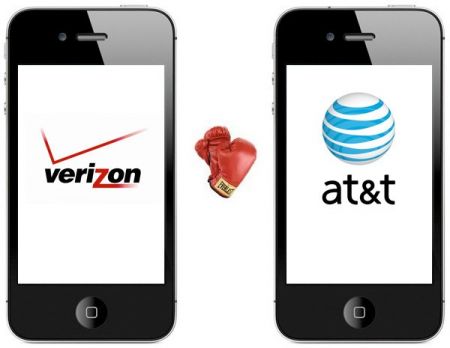 It’s no secret that Verizon and AT&T are at war. They are constantly battling over the best network, and ultimately the most customers. Even though Verizon has generally had a larger customer base and better call quality, AT&T has generally had faster 3G speeds (depending on location) and of course the iPhone.

That all changed on February 11th of this year, when Verizon launched their version of the iPhone 4. But it seems snagging Apple’s popular smart phone wasn’t enough for Big Red. They took this wireless war to a tiny little battlefield called predictive text…

BGR‘s Jonathon Geller reported earlier today that he came across a tiny alteration in his Verizon iPhone 4 that he hadn’t noticed before. It appears that unlike the AT&T iPhone 4, Verizon’s version won’t correct ‘att’ to ‘AT&T’ automatically. As microscopic as the change is, it fascinates me. This little detail was obviously talked about at some point by some very important people.

You don’t have to be a rocket scientist to know why AT&T was taken out of the Verizon model, but ‘Verizon’ is still recognized by my AT&T iPhone 4, so go figure. It all seems so silly to me, but I’m sure there are legal reasons behind it.

Has anyone confirmed this on their Verizon iPhone 4’s? Tell us below!