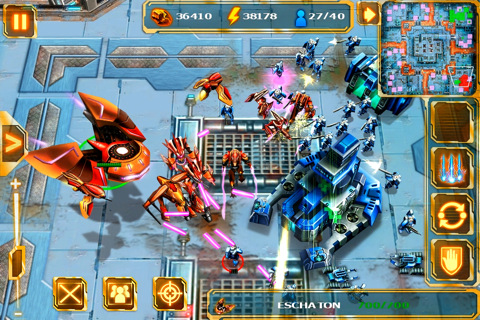 You have to give it to Gameloft and their “inspired” titles. They keep churning out unoriginal games and I’m quite guilty as I have bought and reviewed a couple as well… for example, Zombie Infection aka Resident Evil, N.O.V.A. 2 aka Halo, and now Starfront: Collision [iTunes link] aka Starcraft. 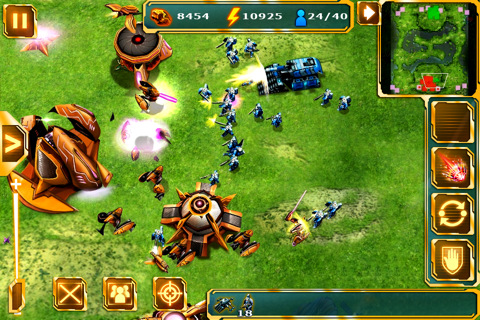 Hopefully this game raises a few eyebrows at Blizzard and with any luck we could be seeing a Starcraft or Warcraft port to the iPhone. *fingers crossed*

The mechanics and gameplay in Starfront are similar to any RTS game. There will be three races: the Consortium who are human miners, insect-like Myriad, or the advanced-robotic Warden. With your chosen race you will battle it out on the planet Sinistral to gain control of the rare Xenodium crystals.

Just like any other RTS game, you will mine resources, build structures, train battle units, research/upgrade them and defend or swarm your enemy until you accomplish your objective or leave their home base in ashes.

Controls are intuitive and effectively use the touch screen technology. You will scan the area by tapping and dragging and pinching the screen will bring up a highlight box to select multiple units.

After you select units you can allocate them for up to three quick select buttons for fast access. To move them you will tap on them and on its destination or tap and hold to differentiate movement or attack orders.

Finally, when constructing there will be sidebars that will allow you to choose what you want to build. Don’t fret because it’s not that complicated and everything is really intuitive, and the controls will be thoroughly explained to you when you start the campaign mode. 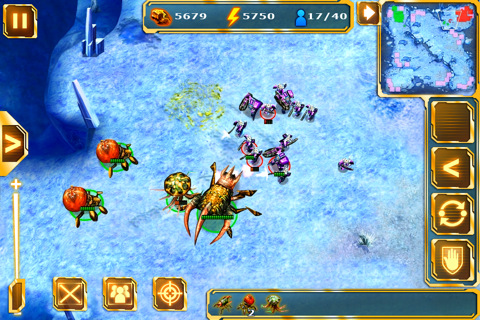 The campaign mode in itself should keep you occupied for a few hours. It’s packed with 17 extensive missions and you’ll take the role of each of the three races. You will begin as the Consortium (human miners) who begin mining the Xenodium in Sinistral but will soon move on to the insect-like Myriant and the advanced-robotic Warden races.

Overall, there was really never a dull moment — as the missions feature an excellent variety of objectives like sneaking through the enemy territory or defending an area until your rescue team comes in.

There is also a single-player skirmish mode and multiplayer online mode for up to four players. In the Skirmish mode, players can choose the race they will play as and against and select up to seven different maps.

Multiplayer mode will feature five different maps for up to four players through Gameloft live, but I wish people were playing when they actually had time to play because things got annoying when they kept on dropping out.

Overall, Starfront is an excellent game for RTS fans. The $6.99 price is a stumbling block as it is quite expensive so unless you love RTS games then you can always hold out for Gameloft’s massive $.99 game sales.