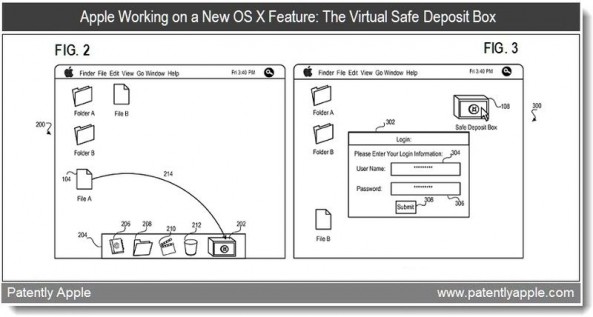 Apple has recently patented a virtual “locker” for encrypted data storage in Mac OS X. Speculation is that this new feature will work with Apple’s revamp of MobileMe and heavily integrate with iOS.

This virtual vault will further Apple’s focus on cloud-based technologies and probably work like Dropbox. Files dropped into said folder on OS X will sync with Apple’s cloud-based storage service (probably replacing iDisk) and encrypt data as it is uploaded to the cloud.

“Without a doubt, Apple will either include it in Time Machine with OS X Lion or consider it as a separate pro-like app the way that Apple has iPhoto and Aperture for more value. Personally, I think it should be one of the perks for adopting OS X Lion.

It’s a value proposition and one that will ease everyone, young and old, into trusting “cloud” based services. Then again, Apple may decide to slide this feature into MobileMe so as to push more business its way and expand their cloud services. Time will tell.”

There is no way to know how Apple will implement its revamp of MobileMe into its platforms for sure, but iOS is sure to be apart of the equation.

9to5 Mac theorizes that iOS will be a big part of the “Safe Deposit Box,”

“We speculate that this upcoming feature will tie right in with iOS and whichever files you put in your “Safe Deposit Box” will show up in a new app made by Apple for MobileMe members and if the user uploads any media (music, videos, and pictures) it will automatically show up their respective iOS applications. This service will surely replace Apple’s long-existing iDisk feature as they are essentially the same thing, but “Safe Deposit Box” seems more intuitive and more secure.”

We’ll be sure to keep you updated on Apple’s MobileMe developments. Apple seems to be taking its cloud services much more seriously as of late, and we’ll probably see cloud streaming/storage as a huge focus in the next Apple event.

How do you think Apple will enhance MobileMe and iDisk? I’d like to see Apple just buy Dropbox.