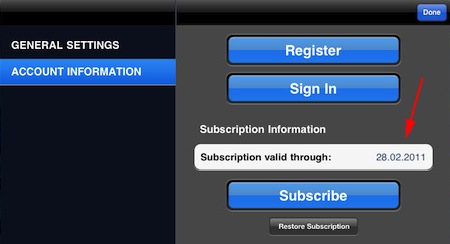 If you’ve been patiently waiting for iOS 4.3, this might come as a good or bad news, depending on how you look at it. If that’s any indication of the future iOS 4.3 release, the fine folks of this German website came across information that suggests Apple’s latest iOS might be available to the general public on February 28.

This speculation is based on the fact that The Daily iPad app which was having a free trial until today, extended their trial period to February 28. Because The Daily is supposed to come on a subscription model which will be only available on iOS 4.3, it is safe to believe this firmware will come out on or around 2/28/11…

Developers haven’t been seeded the iOS 4.3 GM yet so there’s still time ahead of us before iOS 4.3 drops.