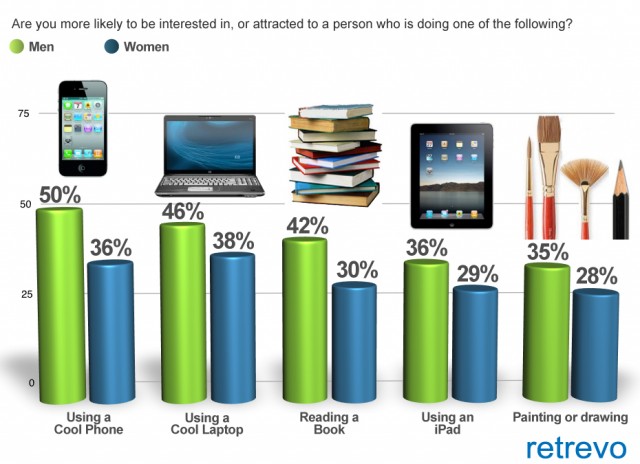 If you’ve been trying to impress a significant other with your iPad, it probably won’t work. According to Retrevo’s Gadgetology study, using an iPad is lower on the list of things men and women find attractive. Actually, it’s even less attractive than reading a book.

Just in time for Valentine’s Day, Retrevo asked consumers whether they notice other people’s gadgets and how someone’s gadgets affect their opinions of them. The results show that using an iPad is the least likely thing a person would be attracted to…

So if you’re looking for some attention, Retrevo’s report suggests people are more attractive to a person using a “cool phone”, such as the iPhone. And if you don’t have an iPhone, a MacBook should do the trick as well.

Using an iPad is lower on the list of things men and women find attractive than even reading a book. We’re not sure why this is so, perhaps there is an element of resentment toward iPad owners among those unfortunate to be iPad-deprived.

With Valentine’s Day on Monday, you might wanna ditch that iPad and go with your iPhone or laptop instead, if Retrevo’s report is anything to consider.

Do you agree with this report? Let us know your thoughts in the comments!