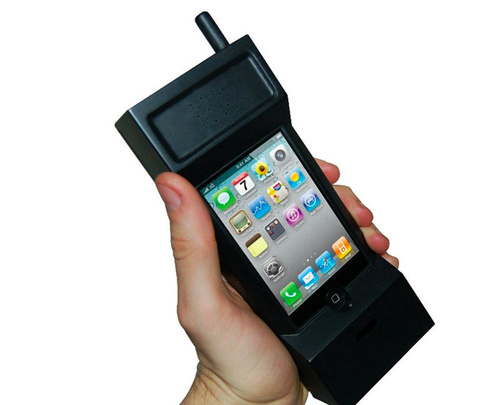 “Mobile” phones were huge in the ’80s. In fact, they were the largest they’ve ever been. Plastic shells, giant battery packs and long antennas probably come to mind. In the ’90s, phones started getting drastically thinner and more compact. In 2004, the Motorola RAZR shellshocked the mobile market and phones started getting super thin and light.

For those of us who like to feel nostalgic…

The “Mobile Phone Massif” aims at bringing the ’80s back to your iPhone. Here’s the official description,

“It was only a matter of time before BIG was BIG again. The Mobile Phone Massif bigs up the BIG mobile phone.”

The functionality of this case is practically none, but it’s worth a good chuckle. However, don’t think you’ll be able to fit this bad boy in your shirt pocket.

The Mobile Phone Massif will cost you $20.

Did you have a mobile phone in the ’80s? We’d love to hear some stories about your first experience with a mobile telephone.