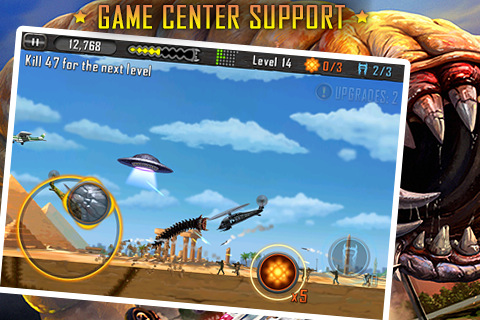 Death Worm [iTunes Link] was created by PlayCreek and is perfect for gamers with those midnight munchies for delectable human corpses. A couple months ago I reviewed Super Mega Worm and had so much fun with it that I decided to give Death Worm a round, or in my case many rounds!

Just like Super Mega Worm, you control a worm with only one purpose, to eat or destroy anything that moves.

This game packs a full course meal! First as an appetizer, we have animals such as birds, elephants and more.  Next for your entree you can choose between mindless pedestrians or police officers. Too light? How about Bazooka carrying Soldiers. Also as a side dish you can devour cars, trucks and other land vehicles. Finally for desert, we have a few different helicopters, planes or the ultimate surprise… UFO’s!! Still hungry? Well you can choose between 3 different locations!

Every level will give you a kill goal. For every goal achieved you will pass the level which will then allow you to upgrade your worm’s size, speed, 10% damage reduction, strength of your fireball or add +3 seconds to your speed bonus.

As you massacre and cause mayhem on the ground you will be able to pick up fireballs or speed bonuses that randomly appears. Once you collect three of these bonuses you can save or use them to spit deathly fireballs or immensely increase your speed for only a short amount of time.

Controlling is much easier as there will be a virtual stick. I had absolutely no problems weaving in and out of the ground targeting groups of people or cars.  Also trucks will drop boxes or rocks that allow you to hit them from below. This will launch the boxes into the air and destroy many things in its path.

Actually hitting these boxes/rocks took a little practice but once you are able to hit it in the direction that you want, then that is when you will start causing some serious damage.

Once you get into the further levels you will have a lot of helicopters, tanks, soldiers, etc coming at you from all directions. Hit a box at an angle with enough speed so that the box flies horizontally and you will destroy at least 5-6 or even more helicopters and probably a few tanks as well.

Overall this game is so much better than Super Mega Worm in every way. There are 3 locations with 15 levels each. You will have kill goals but there are also different goals (buy the game to find out!), which really adds to its difficulty.

All in all, I had a blast playing this game. However I felt like I wanted more. I felt that the levels were too short but that was probably because I was having such a great time. Anyways you can buy this game for only $.99 and I look forward to hearing your thoughts!