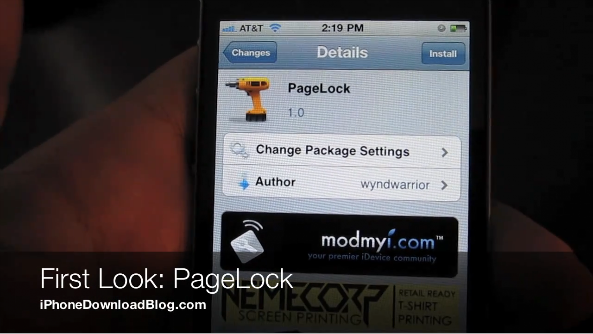 Lately, a slew of jailbreak tweaks have hit the Cydia store, and PageLock is one the more interesting ones in that bunch. PageLock is just that, interesting, but not necessarily useful, or even desirable for that matter.

The basic premise of PageLock is to lock your iPhone’s Home screen to just one page. In essence, that means no swiping from page to page, whatsoever.

That can be kind of cool, especially mixed with other jailbreak tweaks like SpringJumps, but it certainly takes some of the “iPhone” out of the iPhone, if you know what I mean.

Page swiping is one of the iPhone’s most essential features; it’s on an iconic level. Getting rid of such a feature takes some of the fun out of using the iPhone, as you’ll notice in this First Look video…

One of the main issues I had with PageLock is the fact that if new apps were installed, and they happened to be installed on the next screen over, you’ll have no way to access those apps outside of a Spotlight search. That was a huge deal breaker for me.

I don’t want to come across as if this tweak has no use, as there are obviously a few of you out there who will find such a tweak useful. For most people though, you’d probably be better off sitting this one out.

Although it’s free, unless your need for such a tweak is clearly defined, chances are you’ll find PageLock more of an annoyance than anything.

Have you tried PageLock? Do you agree?