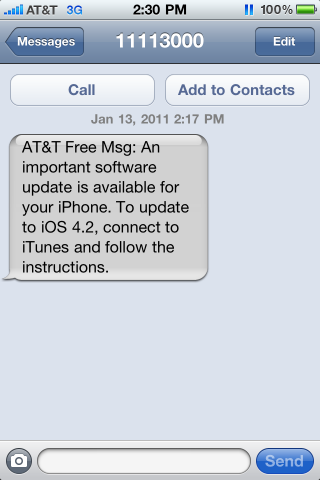 If you’re rocking an unlocked phone, it would behoove you to stick to the tried and true suggestions from the Dev Team to stay away from official updates. AT&T has recently started sending out mass text messages urging customers to update to iOS 4.2.

Why would they do this? Since AT&T is already on the cusp of losing quite a few users to Verizon’s iPhone once it is released, the company is in a frenzy trying to convince customers to stick with them…

If you can remember, they even offered early upgrades for iPhone 4’s in order to lock customers into another 2-year deal. This was done because they knew that the Verizon iPhone was only six months away.

Now, AT&T is spamming customers via SMS urging them to update to iOS 4.2. Well, as we know, there is currently no unlock for this firmware version.

So, say a customer wanted to dump AT&T for Verizon? Naturally, they’d want to sell their current iPhone in order to recoup the costs of the early termination fee if they were still locked into a deal.

Having an unlocked phone means that you could sell the iPhone to either an AT&T or T-Mobile customer. If your phone is locked, though, your only choice is AT&T until an unlock is released.

If the purchaser of the iPhone is thereby locked into AT&T, then AT&T doesn’t really lose a customer; see how that all works out?

Whether or not an unlock will be released before the iPhone launches on Verizon is anyone’s guess, but for the conspiracy theorist, it sure sounds like a sneaky plan, doesn’t it?