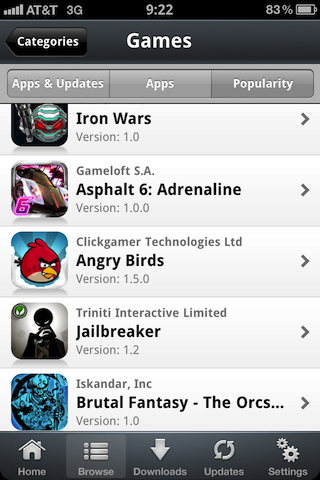 Infamous jailbreak application Installous just had a major update and now looks better than it ever did. For those of you who don’t know, Installous is an application that lets you download cracked apps on your iPhone. In short, it’s like the App Store for cracked apps.

I have to admit that the app has been beautifully designed. It looks great and seems to work as advertised. This being said, we at iDB strongly disapprove of anything related to pirating apps…

I’m not into downloading cracked applications. I can afford to spend $.99 on Angry Birds or any other app, so that’s not really an issue. I have to admit though that I’ve used Installous before while traveling internationally. That’s something that is often disregarded, but depending on where you are in the world, you might not be able to download certain applications from the App Store.

When we were in Thailand last year for example, my lovely fiancee’s iPod Touch would not connect to the US iTunes Store, no matter what. The only way for her to download applications was to get them via Installous. Back in the US, I got her the new iPhone 4 and she legally downloaded copies of the apps she wasn’t able to get installed during our trip.

Something tells me there are a lot of you out there who use Installous. If so, would you leave a comment and explain why you use it?