When it rains in the jailbreak scene, that’s a good thing. Now it looks like there might be some scattered showers in our forecast in the form of RubyRa1n, which is reportedly iPhone liberator GeoHot’s lastest and greatest jailbreak tool.

The evidence? A domain name registered in his name on the same day that his most recent jailbreak tool, LimeRa1n, was registered… 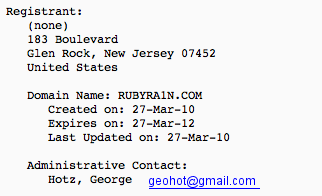 LimeRa1n was eventually released back on October 9th of 2010, so there was a fair amount of time between his domain registration, and the actual release of the jailbreak. This lends proof to the theory that it’s likely we’ll see a RubyRa1n jailbreak tool sometime in the not too far away future.

Currently there has been no official word from GeoHot himself, but if and when such word does come forth, we’ll be sure to keep you informed.

Is the jailbreak community ready for GeoHot’s latest jailbreak tool? Did you use LimeRa1n back when it was released?