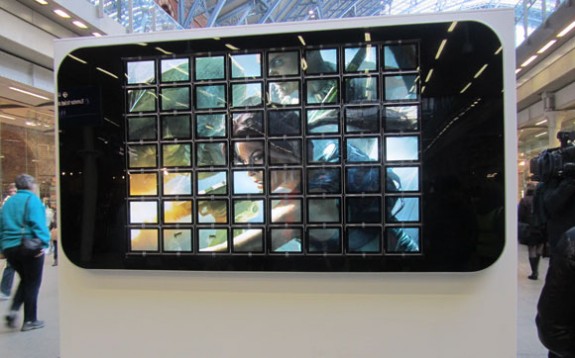 This is the world’s biggest iPhone. This giant iPhone is composed of 56 iPads and is located in the heart of London’s famous St. Pancras International Train Station.

This giant device does not serve much of a practical purpose, it serves as a promotional stunt for the new iOS game, “Lara Croft and the Guardian of Light.” It’s a shame though, I wouldn’t mind having this massive iPhone hanging on my bedroom wall.

Promo images for the new Lara Croft game run on this giant display (I guess it’s actually 56 smaller displays) for anyone walking by to see. But don’t get too excited, you probably can’t play Angry Birds on it…

The makers of this new Lara Croft game were smart to come up with such an interesting promotion tool. I’m sure that this giant iPhone stands out to passersby.

You can pick up Lara Croft and the Guardian of Light for a steep $6.99 in the App Store.

What do you think? Would you like a giant iPhone composed of 56 iPads? If I actually owned one I would probably take it apart and fill my house and car with iPads.