Apple recently patented a new, spiral-based, graphical UI. Details on the patent reveal that the new “Spiral” interface is most likely intended to replace Cover Flow, an already existing interface in OS X and iOS. The design of the interface looks like it will work well with both standard and multi-touch displays, and will most likely be included in OS X Lion next summer.

The goal of this new interface is to display more information than was previously possible in a limited space. Like everything Apple does, another goal is to also make it as visually and aesthetically appealing as possible to the end user…

“Apple’s patent describes methods and arrangements for manipulating a playlist by providing a graphical user interface in the form of a receding spiral made up of a collection of icons representing media items in the playlist having an icon in the center of the spiral representing the entire playlist. 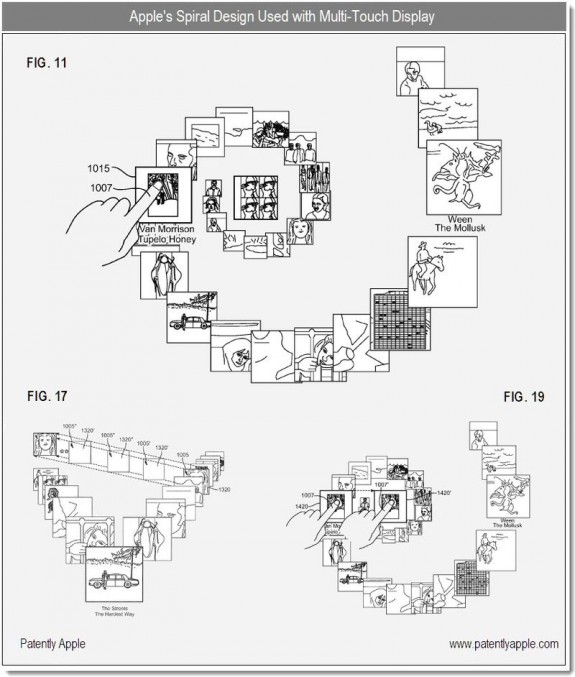 Apple has also patented the designs of alternative versions of this Spiral UI. A receding, V-style design is also detailed in the patent (as is shown in the bottom left of the above image).

It seems that this type of a graphical interface would not be much more helpful than what already exists in Apple software. The “V” design adaptation of the Spiral UI seems to simply be a more 3D version of the already existing Cover Flow.

However, this Spiral UI is an interesting take on how to move the process of file management into the future. And it’s nice to see Apple working to make their software the best it can be.

This patent covers both handheld (iOS) and desktop (OS X) software. It is unclear if this new interface will be implemented into OS X Lion. Apple did already give a basic demonstration of OS X Lion a few months ago, and this type of interface was nowhere to be found in the keynote. That doesn’t, however, mean that we won’t be seeing this new Spiral UI in OS X Lion.

I think it would be safe to say that this Spiral UI will most likely be a part of the next major release of iOS (perhaps coinciding with a new iPad or iPhone).