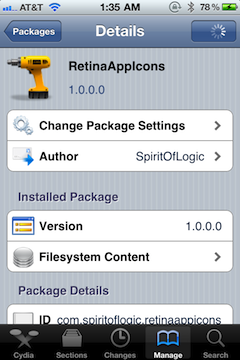 Don’t you just hate it when you download an App Store App onto your beautiful iPhone 4, only to be presented with some ugly low-resolution app icon? I don’t know about you, but the first thing I do is throw that bad boy in a folder somewhere. Can’t have that ugliness de-beautifying my Retina display.

Thankfully, there are ways to convert your icons to retina-worthy icons, but those methods all required some form of end-user intervention. RetinaAppIcons is a jailbreak tweak that promises to take care of all of the dirty work for a nominal fee of $0.99 cents, but does it work as advertised? 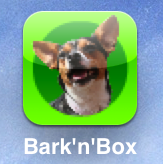 Once you install the tweak, all it takes is another respring, and all of your existing App Store Apps that lack retina compatible icons will automatically be converted.

I was skeptical at first, but I witnessed it work as promised. Oddly enough, a lot of times subtle aspects of the icon would change as well, like this “free” badge in this instance.

But that’s not a big deal, because even with the subtle changes that sometimes occur, the icon is always much more attractive than it was before, due to the added pixel density.

What a perfect solution for those with lots of apps from lazy developers who have yet to update their app icons. The developers of the tweak say it works with 99.9% of all App Store Apps, and although there’s no way for us to truly test this, it fixed all of my low-resolution icons with no issue.

It’s easy to recommend RetinaAppIcons, because at just $0.99 cents on Cydia, it will make your iPhone’s home screen more aesthetically pleasing, and requires minimum effort on your part.

Do you still have a lot of outdated low-resolution icons littering your iPhone’s screen?