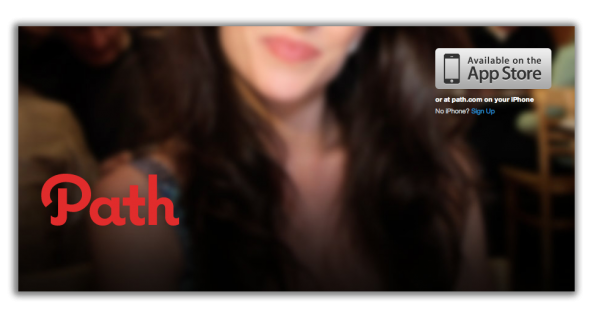 A new social network startup has been getting lots of attention over the past few days. I say “social network” with hesitation. Path is a San Franciso-based startup with some high profile employees from the tech industry. Dave Morin, the former senior platform manager at Facebook, is the company’s CEO. Shawn Fanning, the co-founder of Napster, is also heavily involved in the project. Kevin Rose, of Digg fame, is an investor.

Don’t let the attractive and mysterious woman in Path’s web banner fool you, you won’t find her on Path. In fact, you won’t find many people at all. Because Path only lets you have 50 friends…

The Path Blog issued a statement conceptualizing their network,

“Path is the personal network. The personal network doesn’t replace your existing social networks – it augments them. Capturing a moment on Path is simple and contextual. Simply take a photo with your camera on iPhone and add context around that moment in the form of tags for people, places and thing. These tags provide 3 types of context which we think help capture a moment. Think of it as a place for the memories along your path through life.”

The problem that Path is trying to solve: our social networks (like Facebook) are too busy, and as a result we miss the moments we actually want to share with our real friends. When you follow hundreds and hundreds of people on Twitter, or have more “friends” on Facebook than you could actually know, you miss the moments and lose the closeness that those networks intend you to have with the people that you care about. 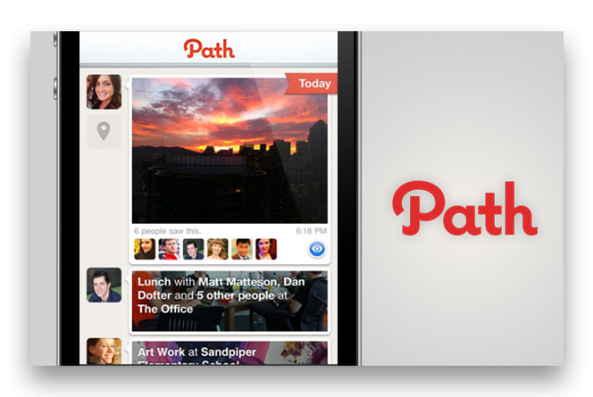 There apparently is such a thing as having too many friends, and the Path team thinks that their network is the solution. Path is meant for you to share personal moments and photos with 50 (and no more than 50) of your closest friends. This magical number of 50 was based on “Dunbar’s number.” Robin Dunbar, an Oxford professor of evolutionary psychology, claims that the average human can only maintain about 150 stable relationships. For some reason, Dave Morin decided we can have no more than 50.

According to Path, because you are only sharing to 50 of your closest friends, you can always have the assurance of privacy whenever you share something. In the official announcement, the company made the corny statement that, “Path is a place where you can be yourself.”

I believe that theAppleBlog said it best,

“Path, in theory, seems to be a great idea. In reality, when you step back and think about it, the idea of a restricted, personal network has the utility of a toy poodle. The problem of too many friends is one that afflicts those who are hyper-connected and who often confuse their Rolodex for friends. Most people can do many of these things with Facebook, and more.”

Path sounds great at first. Finally a place where I don’t have to worry about who might see that drunk photo from last night. And don’t get me wrong, the app is gorgeously designed. It looks like a lot of thought went into making everything work well. But there are too many glaring problems with Path’s premise and execution.

Anytime you open up a new social network and it’s totally empty, there’s a problem. You can only add friends through an email invitation in your iPhone’s contact list. And manually adding email addresses is the last thing I want to take up my time with. I understand the logic that only your closest friends will have your email address, but what if you have a friend that doesn’t really use his/her email? I mean, isn’t email a dying medium anyway?

Not all of my 50 closest friends have iPhones. Path’s remedy would be having non-iPhone users use the website. Yeah right. Using this type of a mobile photo sharing service on a website will attract users like two negative charges.

So, even if users don’t find the tediousness of adding friends through email unappealing. And even if users aren’t bothered that there “closest” friends can only have iPhones to be on Path. There’s still the obvious issue that all of the people I would add on Path are already on Facebook.

It seems almost insulting to think that the people behind Path don’t think that I can manage my social life online. This whole issue that they’re trying to tackle is a misreading of simple human incentive. If there’s something that I really want from someone (whether to see a photo they share or know what’s going on in their lives), I will make sure I see it no matter where it’s being posted.

Facebook handles exclusivity rather well. You can create lists of friends to see exclusively in your news feed. You can add shortcuts to people’s profiles on the iOS app. You can set who you want to be able to see what you post. Or, heaven forbid, you could just send them the picture personally if you really want them to see it.

In my opinion, Path is trying to solve a problem that doesn’t exist. Occasionally I find that I miss moments that I would have liked to have been apart of on Facebook or Twitter. But that’s not the social network’s fault- it’s mine. The last thing this overly-stimulated generation needs is another specialized service with another specific goal for users.

If I really want a relationship maintained, I could actually call the person on the phone.

I like theAppleBlog’s headline best. Path is, “On A Path To Nowhere.”

Even though I don’t endorse Path, I still think you should download the app and try it for yourself. Maybe this type of network is just not appealing to everyone. Download Path for free in the App Store. And check out this interesting video the Path team put together.

What do you think? Does Path sound like something you would use?