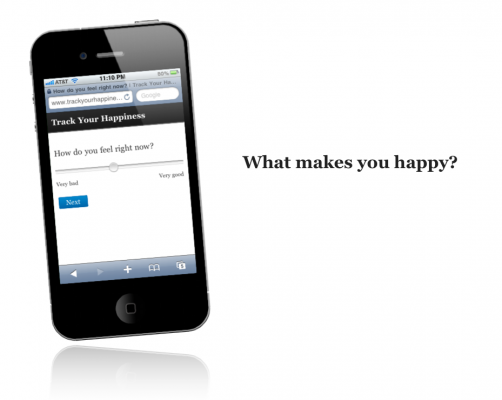 Track Your Happiness.org﻿ is a recent project from a group of Harvard scientific researchers. The project’s goal is to, “investigate what makes life worth living.” Specifically, to see how the wandering mind and happiness correlate.

But how could this type of a survey really be effective when you would need the ability to invade the mind of your participant throughout the day for effective results?

Researchers were able to do something that traditional physiology methods have not allowed in the past: to intrude on the lives of their participants in a non-threatening and targeted way. What better means to prick the wandering mind than through what is the usual cause of a wandering mind- the smartphone.

The people behind “Track Your Happiness” explain their research,

“For thousands of years, people have been trying to understand the causes of happiness. What is it that makes people happy? Yet it wasn’t until very recently that science has turned its attention to this issue.

Track Your Happiness.org is a new scientific research project that aims to use modern technology to help answer this age-old question. Using this site in conjunction with your iPhone, you can systematically track your happiness and find out what factors – for you personally – are associated with greater happiness. Your responses, along with those from other users of trackyourhappiness.org, will also help us learn more about the causes and correlates of happiness.”

This intriguing research project is the brainchild of Matt Killingsworth, and is part of his doctrinal research at Harvard.

According to the report, wandering minds seem to be synonymous with iPhone usage (big shocker). When asked throughout the day, participants reported that they were daydreaming almost 50% of the time. There was only one instance when mind-wandering decreased to below 30%- during sex (again, big shocker).

Interestingly, depression and unhappiness were the emotions most associated with daydreaming. This fact suggests the the former is the cause the latter.

“That’s the biggest take-home,” said Killingsworth, who conducted the study with his colleague Daniel Gilbert. “Mind-wandering might be something that is damaging to people’s happiness.”

The research suggests that keeping busy and practicing some type of focus concentration method could help battle depression. However, cutting down on mind-wandering completely is not a healthy option either. It is commonly understood that invention and creativity are also associated with daydreaming.

Even though an official report has been filed, Track Your Happiness is still operational and open to participants. The researchers behind the project are still committed to finding the cause of happiness. Perhaps they haven’t reached a sold conclusion because iPhones themselves are the cause of happiness. (I know I’m biased, but still.)

You can sign up to be apart of this research at the project’s website. You have to create an account and fill out a web form. Once you’re done with that, Track Your Happiness will send you a notification three times a day to take a quick survey of your mood. As you continue with the surveys, your “Happiness Report” will start quantifying data.

When the survey feels that it has enough information about you, it will give you your finished Happiness Report so that you can see when you were most happy and what circumstances were associated with your moods.

What do you think about this research? Has the age of iPhones and constant access to the internet created a culture of unfocused and unhappy people? What methods do you use to help you focus and boost your mood throughout the day?