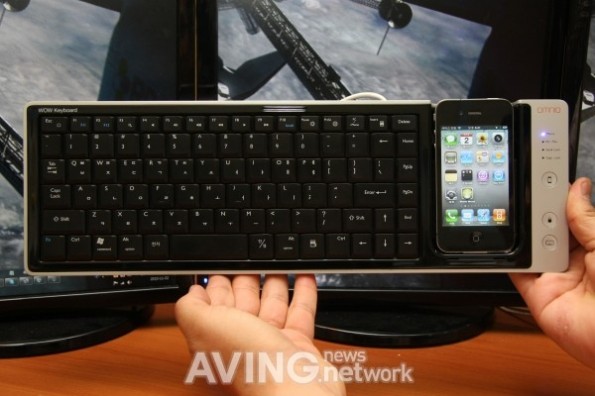 Does an iPhone-integrated keyboard for your Mac or PC sound interesting? The Korean tech company, Omnio, thinks so.

The WOWKey device is a desktop keyboard that boasts iPhone integration through a built-in dock. This “made for iPhone” keyboard is the first of its kind, offering extensive integration with iOS. This inventive gadget opens up a world of possibilities…

You are given 15 hotkeys designed for use with the iPhone. The integrated dock handles charging and syncing with iTunes. When you plug your iPhone into the WOWKey, you still have full control of iOS. But there is a software element that begins to interact with the keyboard’s physical iPhone hotkeys. The hotkeys will help with making typing and app-switching on your iPhone much more efficient. 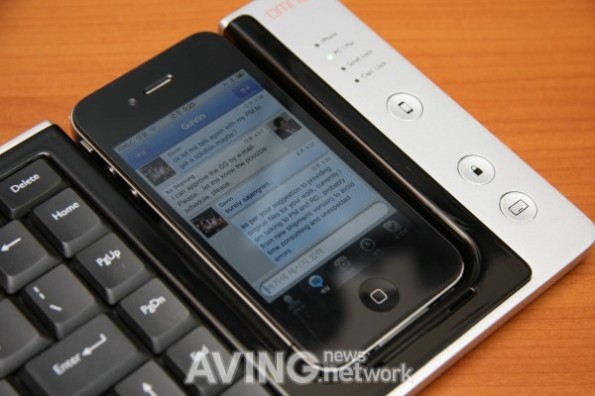 The WOWKey opens up many possibilities for turning your iPhone into a media center remote control, number pad, multi-touch trackpad (TouchPad), and AirPlay controller (when iOS 4.2 is released). I’m sure it will also improve the efficiency of your text message replies.

This keyboard tries its best to be the best cross-platform keyboard it can be. It offers both the Apple and Windows secondary buttons (such as Command, Option, Function, Windows flag, etc). Omnio has licensed use of multitouch in iOS for both the PC and Mac, which is very nice. This means all of your gestures will be supported on both platforms. Users can simply switch between iOS, PC and Mac modes with the press of a button.

The device has received the official seal of approval from Apple, and is slated to hit online retailers soon for around $115. Only the 3GS and iPhone 4 are supported by the keyboard’s dock.

I would keep an eye out for this gadget when it’s released. I know I’ll be buying one.

What do you think? Would you use a keyboard like this?