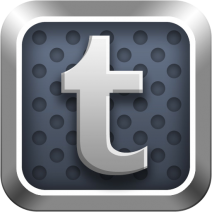 Tumblr has started making a name for itself as a viable blogging platform. For the longest time, Tumblr was considered the more lightweight and amateur version of established platforms like WordPress. With over 30,000,000 monthly visitors, the micro-blogging platform has become a force to be reckoned with.

The folks at Tumblr have been making numerous changes to the platform, and now the service offers almost every blogging feature that you could think of. Tumblr takes a non-intrusive, social approach to blogging. The official Tumblr iPhone app was recently updated to support some of the new features of the website…

It’s no secret that I love Tumblr. My personal blog has been hosted on the platform for almost three years. I’ve watched as the service has grown into one of the most robust and easy to use blogging platforms out there. I am very pleased with the new Dashboard interface in the iPhone app. 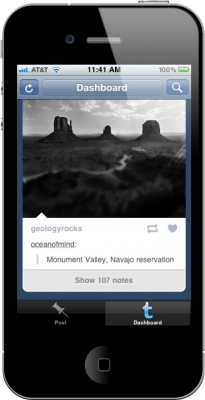 On Tumblr, your Dashboard is a stream of all the posts from other tumblogs that you follow. Previously, browsing your Dashboard was painful on the Tumblr iPhone app. When I first downloaded the app a long time ago, I looked at the Dashboard panel once, and then vowed to never use it again. It was clunky and poorly optimized for the iPhone.

Tumblr has finally got around to cleaning up the mobile interface. They have incorporated their popular “reblog” and “like” features. Rebloging a post is as simple as clicking an icon and adding a caption. Endless pagination has also been implemented, meaning you’ll be scrolling through your feed for hours without having to go to different pages.

The app also has excellent posting functionality. You can post all kinds of content to your tumblr straight from your iPhone.

I highly recommend you try out the newly optimized Tumblr app. If you don’t have a tumblr, I strongly recommend getting one. I sincerely feel that it is the future of blogging. Make sure to follow my tumblr as well (shameless plug, I know).

Download the official Tumblr app for free in the App Store.

Do you use Tumblr? What do you think of the iPhone app?