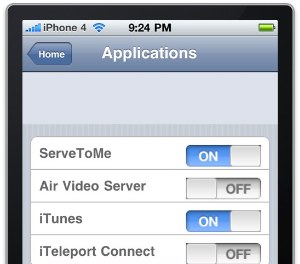 Ever wanted to control your Mac from your iPhone while still being able to fully customize everything you can do?  Sure there are remote control apps out there, but many of them require software on both the iPhone and the desktop (and are rarely free).

Brett Terpstra has developed a working PHP script called HomeControl that will let you control your Mac from within Mobile Safari.  The experience has a native iPhone look and feel and it mimics the iOS UI controls…

The entire interface looks like it belongs as a native preference pane within the Settings app.  The best part is you can expand it as much as you’d like just by adding scripts to the folder on your Mac.

Although it’s a little tricky to set up, and you’d need to be a little comfortable with using Terminal, HomeControl is infinitely expandable.  If you know some HTML, customizing it further will be a breeze.  If not, the project is well documented.

I have tried it out and I love it.  If you install it, tell me what you think, and how you’ve customized or expanded it.