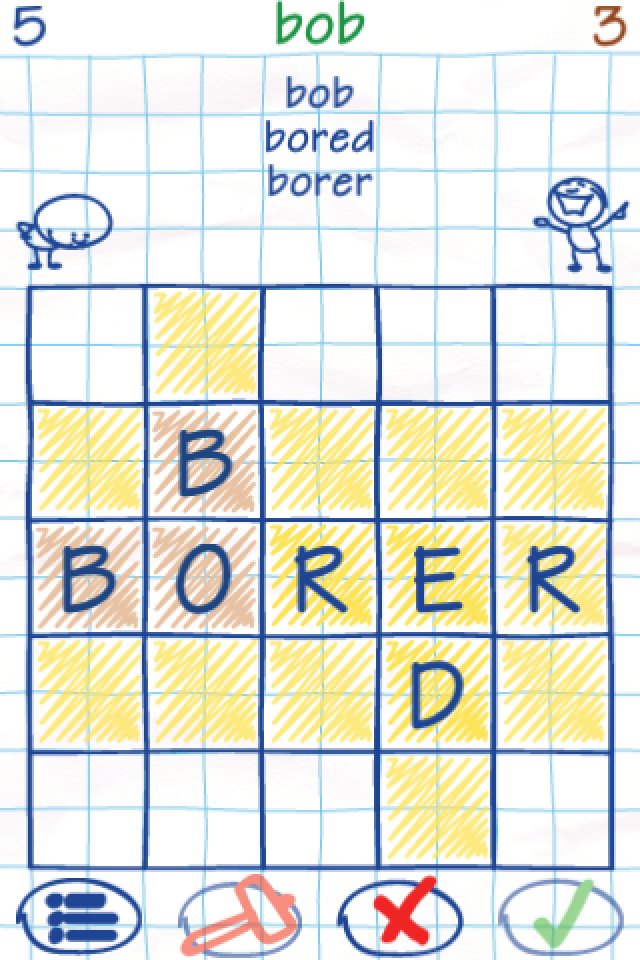 iBlockhead is easy to learn and even easier to master word puzzle game you can play against the computer or friend (either using the same device or via Bluetooth).

The name doesn’t give away much what it’s about but I’ll so my best to explain. The game consists of a 5 by 5 spaced board with a 5 letter word, or series of letters running horizontally through the middle. Your task is to select letters in sequence to spell out a word (much like Boggle)…

The catch is that before your word can be completed and the points collected, you have to add a letter to it. You can only add one new letter to it. Points are calculated as 1 point per letter. The longer your word, the larger your score will be. The game ends when there can be no more letters added to the board, and highest score wins.

I found that a lot of words did not “exist” and had to be added to the dictionary. I still got the points, but I think, at least I hope, the computer will learn to use them too. If you don’t agree with the word used by the computer, you can cancel it and force it to try again. Alternatively, on your turn, if you can’t make a word, you can skip your turn.

Allowing users to add their own words is good, however I can see this abused for people that just want to win.

The graphics are very simple, consisting of stick figures on crumpled paper backgrounds. The music isn’t interfering with concentration and actually mellows out a bit using a Jamaican tune.

You can do quite a bit in the settings. There are 3 levels of difficulty, change the size of the board from 5×5 to 6×6 or 7×7 and change languages from English to German or Russian.

Another $0.99 app that I see a place for in my iPhone. You can download iBlockHead from here.