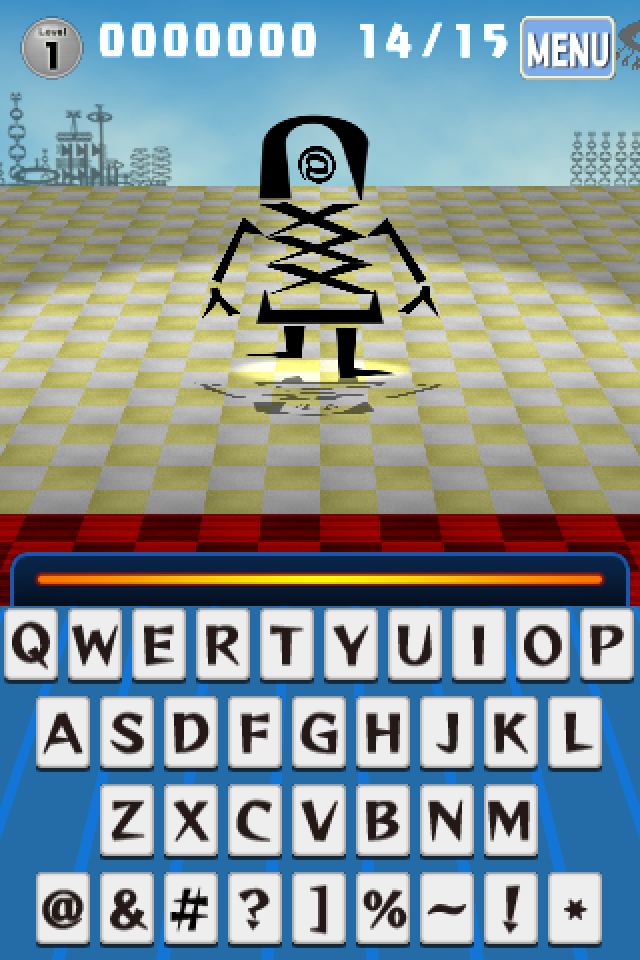 This game takes me back to when I was in art class in school. Our assignment was to use fonts to create people, animals or things. With Font Monsters, aliens made up of letters are trying to invade Earth. Your mission? Blast letters that they’re made up of at them to destroy them.

Actually Font Monsters is starting to remind me of Typing Of The Dead (spin off of House Of The Dead), but instead of going through the level and finding the monsters, you’re stationary while the monsters come to you. If you guess, or press the incorrect letter it is made up of, it will blast a letter at you that you have to shoot down before it reaches you…

There is a life meter above your keyboard so don’t let it drop to zero or it’s game over. Besides blasting letters at you, the bosses walk towards you too. Once they read you, you keep getting damaged while it’s at your keyboard.

I’ve only played the first two levels, but so far I’ve been through 35 stages in those levels (each level having between 15-20 stages). I imagine the higher the level the more stages there are and more bosses.

The graphics and animations are simplistic, as is the music and sound effects, but the combination of its simplicity is perfect for this game. The music is very engaging in a sense that it creates a mood of urgency (aptly so for an invasion score).

You can keep track of the monsters you encounter with its built in monster encyclopedia. I’m definitely going to keep this game, even though it was $1.99. I’m curious how elaborate the monsters will get.