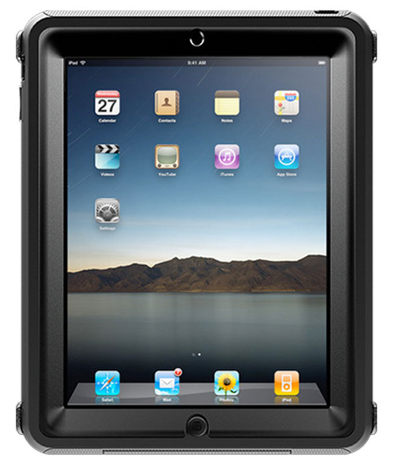 OtterBox, the maker of in my opinion the best protective case for the iPhone and iPod touch now also offers two new cases to protect your iPad as well.

Stopping by their site you will find their new iPad Defender case ($86.95) and their iPad Commuter case ($62.95). One of the nice things with the iPad cases is that they have a removable cover on the bottom that allows you to leave the case on the iPad and still plug it into a variety of docks/keyboards and other accessories.

The big differences between the two cases is the Commuter is more of an outer protective shell that goes around the outside of the iPad and covers the back as well and comes with a self-adhering protective touch screen film.

The Defender on the other hand is an entire iPad protective shell that includes the thin plastic screen protector built in just like the Defender series for the iPhone and iPod. In addition, the Defender also had built in props to hold the iPad in either portrait or landscape mode for viewing and working with your favorite new “toy”.

To some, the pricing might seem a bit high, but to me the OtterBox series of products are well worth the money, especially since if you buy the Defender series you are getting fairly hardcore protection for your favorite iDevice.

I noticed today on the Otter Box site that they currently have the Commuter in stock but apparently the Defender is really popular as the site states that they are currently sold out and thus far I have not been able to find them in any stores that normally carry Otter Box products.

I have a sweet Targus leather case for mine now with built-in landscape prop support but I am really tempted to get a Defender when they are back in stock. What is your opinion on this awesome new iPad accessory? Will you go on-line and order one?