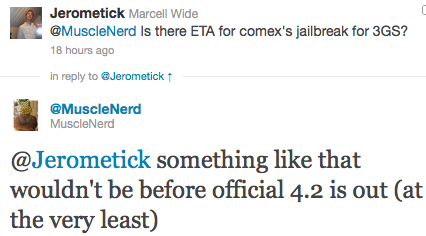 Well, yesterday we confirmed that Comex is working on a jailbreak for the iPhone 3GS but if I were you, I wouldn’t hold my breath too much on that as MuscleNerd made it clear that such a jailbreak wouldn’t be released until November, when iOS 4.2 is released…

So why wait for such a long time. Simply because this iPhone 3GS jailbreak will be a userland jailbreak which can easily be patched by Apple. Comex would probably be able to release this jailbreak now but he doesn’t want to give his exploits away to Apple so they can fix the holes.

While it will be nerve racking for iPhone 3GS owners stuck on iOS 4.1, I think it’s a good thing overall for the jailbreak community. I am hopeful that Comex’s next jailbreak will pwn all devices!