With Apple’s popular Internet-connected devices like the iPhone 4, the iPad, and the recently released Apple TV, there’s an ever increasing demand for cloud storage like never before.

Many companies have recognized this need — as evident by services like DropBox, Evernote, MobileMe, etc. — that they’re virtually as abundant as clouds themselves. So, what’s the best option for you and your iPhone?

Even with big players like Apple pushing their weight around in the cloud storage arena, the solutions offered so far are a bit lacking. If one service does one thing well, then you can bet your bottom dollar that it’s missing a key feature in some other area, and vice versa.

Take for example, DropBox. It’s a great solution for PC and Mac users, but when it comes to the iPhone the application is a bit gimped. MobileMe is nice, because it’s integrated natively into iOS itself, making it easy to upload photos and videos directly to the cloud. But then it costs $99 dollars a year when most of its competitors offer free services.

Just what would make the ultimate cloud storage solution, especially for iPhone users?  We examine 5 essential needs, below. 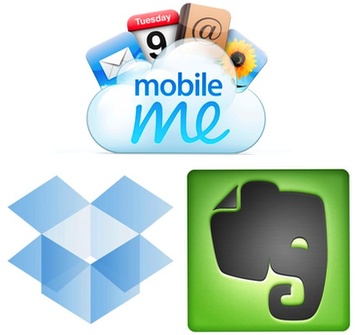 It must be tightly integrated

Bottom line, convenience is a must when it comes to cloud storage. Some of the more popular cloud apps for the iPhone make you go out of the way to set it up, and then it’s a complete hassle when it comes to actually moving your files to your storage space.

If there’s going to be a mass adoption and regular use of any cloud service, it can’t be cumbersome, and it must not be inconvenient. Unfortunately, the likelihood that any other service outside of MobileMe offering this type of close-knit integration is slim.

It has to be cost effective

This is what makes services like DropBox so nice, because they’re essentially free. If you happen to need more space than the allocated amount, you can shell out a few dollars every year to do so.

MobileMe on the other hand is at the opposite end of the spectrum. You have a fairly limited amount of storage space, and then they want to charge you out the wazoo just to be able to use it. If Apple wants a higher adoption rate of their service, they’re going to have to drop the price, and increase the storage.

It has to be functional

When it comes to the desktop experience, there’s no doubt, these services work great and their functionality is amazing. When it comes to the iPhone though, not so much. One of the main gripes I’ve always maintained with DropBox is the fact that you can’t upload more than one file at once.

Now some have said this is an Apple restriction, but regardless of who’s restriction it is, it needs to be fixed. I can share multiple files with e-mail at once, I can even send multiple files via MMS for crying out loud. Why in the world can’t I send more than one photo to the cloud at the same time?

It must be accessible

This is why I love Evernote. It’s everywhere! I can access it from my Mac, PC, iPad, iPod, Linux, and virtually any other internet connected device. I’m surprised they don’t have an Evernote app for my refrigerator already. Get on it guys!

All joking aside though, Evernote’s popularity is a great example of how imperative it is that cloud storage be accessible from anywhere. If I can access it on my iPhone but nowhere else, then really, what’s the point?

It has to be fun to use

Even the most functional, cost effective, integrated, and accessible app would be a total drab if it wasn’t fun to use and nice to look at. Part of the mass adoption of any application has partly to do with the marketing, communication from the developers, and aesthetic appeal of the app itself.

That’s one thing I can say about DropBox. It features a fun to use GUI, developers who don’t take themselves too seriously, and a user community that has a serious say in the overall developmental process. In today’s socially connected world, this is essential.

What do you think about today’s cloud base storage solutions? Do you find them lacking as well? What app do you use the most?