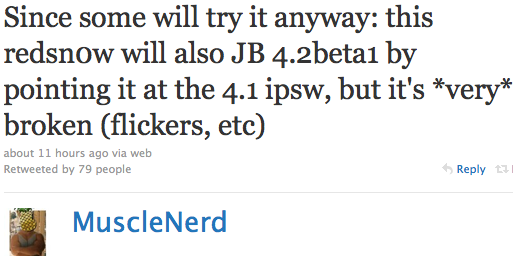 This morning we reported that the Dev Team had released RedSn0w 0.9.6 beta 1 and that this tool could be used to jailbreak an iPhone 3G running iOS 4.1.

MuscleNerd confirmed earlier today that this version of RedSn0w can also be used to jailbreak iOS 4.2 beta on an iPhone 3G, but this doesn’t come without risks as they are many bugs…

My recommendation? Stay away from it as you might end up having more problems than not. If you do want to give it a go, then you can follow this tutorial, except you must point RedSn0w at the 4.1 IPSW, which can be downloaded from here.

Let us know how it goes if you decide to give it a try.