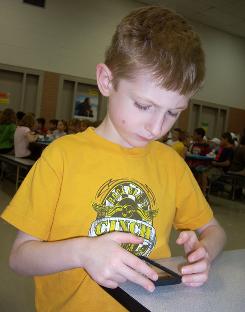 This story makes so much sense that I feel inferior for only realizing the potential just now. The idea of using a touchscreen to help children suffering from autism is brilliantly simple. The fact is that the iPhone might have the best and most simple system in iOS and the two were destined to help each other.

News Channel 10 out of Amarillo Texas has a report that centers on the benefits of using the iPhone to help the children dealing with the ailments that autism has. An app that focuses itself on speech therapy works by having the kids just touch the correct picture of whatever sound is being played. Magical, isn’t it?

An Associate Professor of Special Education said the following about the iOS platform and the medical benefits that lie within:

The iPad, the iPhone the iPod all give them a way of communicating that can be personalized. It sets them free. It gives them a voice. That’s one of the defining characteristics of autism and other communication disabilities is communication problems.

The reality is that there are few ailments such as autism that would be better qualified to be helped by an operating system such as iOS. The whole premise of simply labeled functions behind a perfectly fluid touchscreen couldn’t be more of what a child with autism could need to make the connections that are being inhibited.

The story doesn’t release the name of the application that is being used but the price tag was mentioned. The most basic version of the software costs about $8 while the most advanced version runs about $200. Either way it is saving them thousands because the old versions running on huge computing systems were costing them $10,000.

Do you see the ingenious simplicity behind this cause? Can you see the iPhone or iOS as a whole being used more often in clinical formats? Give us your diagnosis in the comment box below.