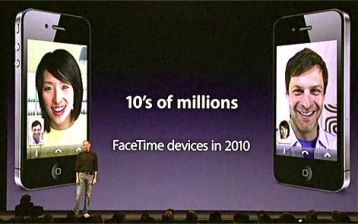 Remember back in June when Steve Jobs introduced the iPhone 4 and the revolutionary FaceTime ability? Perhaps if you’re detail oriented you’ll remember that Jobs also stated that Apple would be shipping 10’s of millions of FaceTime ready devices. How will he make this happen?

Fortune has a broke down report on how Jobs might make his promise a reality in spite of critics who scoffed at the number proposed. I’ll give you a hint, it isn’t exclusive to Apple handhelds…

One analyst says the iPhone is the best spot to start. Piper Jaffray’s Gene Munster predicts that over 23 million iPhone 4’s will be sold between this quarter and the next. While some of those will be iPhone 3GS (not FaceTime compatible) it gives Jobs a head start on his quoted promise.

Next of course is the new iPod Touch. The new media player now offers the FaceTime ability through email and Munster estimates that 10.5 million will be sold in the quarter that starts September 26th. If you’re keeping a tally, that already brings us to over 30 million FaceTime capable devices floating around.

The last possible outlet where Apple can add their FaceTime revolution to is their very own Mac computers. iChat is currently used on both the iMac and all of the Apple MacBook laptops for video chatting.

If FaceTime were to upend the iChat service as the default way to video chat then every iPhone 4 or new iPod Touch owner could call up anyone with a Mac computer. It would also add 13 million FaceTime capable units to the tally of those shipped this year.

What do you guys think? Will iChat be replaced by FaceTime and instantly connect millions more through video calling? Perhaps Jobs overreached when he claimed such a high number back in June. Give us your predictions in the comments below.