This is odd. Like nearly every phone available, when the iPhone 4 was released you had the option of purchasing the device without any commitment to upgrade your AT&T contract. 9 to 5 Mac shows us a section from Apple’s FAQ’s that has them saying  you the device requires a 2-year wireless contract. Take a look at what it says. 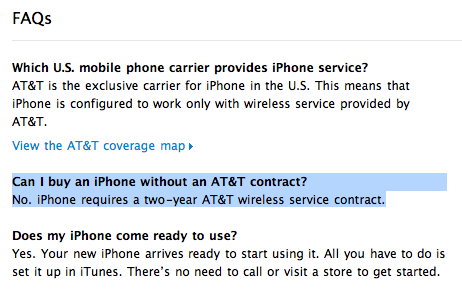 Originally the contract free iPhone 4’s were sold for $599-$699 without the AT&T subsidy. Apparently AT&T is saying that nothing on their end has changed, which has left some (including myself) wondering if this is because of the recent jailbreaking allowance granted by the U.S. Senate.

Have any of you recently bought a contract free iPhone 4? Or is this Apple’s passive aggressive nature coming out in hopes to kill off buyers who jailbreak/unlock an iPhone and resell it for higher profits?