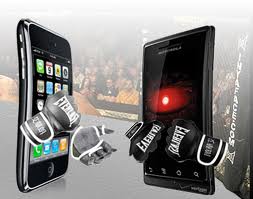 This story fits into the category of a CEO saying what sounds good, but with little believability in what they’ve said. MacWorld reports that Sanjay Jha, Co-CEO of Motorola’s Mobility group said, “I’m comfortable with the dynamic that (Verizon iPhone) would create”. I don’t know what kind of comfort he’s referring to, but the way I see it, Apple will be benefiting far more than Motorola from such an acquisition.

As we reported this week, more iPhone-to-Verizon rumors have been floating around the web-waves. The same Verizon who has pumped a lot of energy and money into the promotion of the operator owned OS. Android was first featured on Motorola, thus Jhasays doesn’t see Big Red deviating from their big investment, even with an iPhone on their roster.

I agree that the Droid is here to stay. I also agree with the CEO when he says he’s confident in continuance of loyalty regarding the promotion of Droid-driven Moto devices. What I don’t buy into is the chipper level of comfort that he proclaims, when it comes to the inevitable competition that a Verizon iPhone would bring. To be blunt, they would undoubtedly lose out on potential customers. How could they not?

I know Jha is saying what any decent CEO would say when he faces tough competition. But for those of us who don’t have to keep the shareholders and carriers happy, I say different. It would be like a starting quarterback saying he’s happy that his team just acquired a better rated QB to compete for the job. It sounds noble, but the level of truth behind it is questionable. Clearly a Verizon iPhone would mean more money for Apple, and less for Motorola. Again I ask, how could it not?