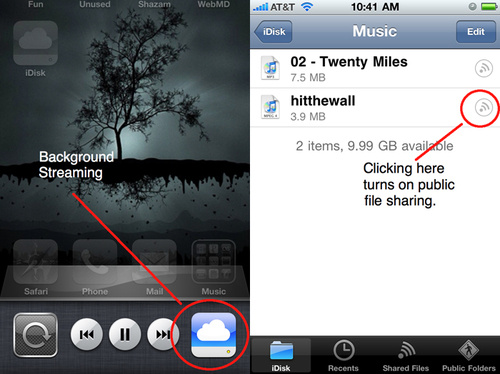 Well I didn’t see this coming after the supposed hangups with iTunes regarding “minimal” access through the cloud. Gizmodo reports that a fellow by the name of Michael Robertson has discovered streaming capabilities of your iTunes library through iDisk. Public sharing between devices with iDisk has been possible for a while, but never streaming in the background, until now. To those who aren’t hip to the MobileMe features, iDisk is the online based storage that is included with the $99 annual fee.

Drag your songs, one by one, or folder by folder, into your iDisk. There is no playlist support as of now, though this writer thinks that feature is an inevitable reality. Right now iDisk has a 20GB maximum, so you big spenders, (or less than ethical gatherers), will have to be selective in the songs you want shared/streamed.

Having tested this myself, I’ll say that it works flawlessly over Wi-Fi. Like I previously stated, the MobileMe service is $99 a year, which includes the apps it offers. Those of you with 3G service, let me know in the comment box how it works over the network. Enjoy!